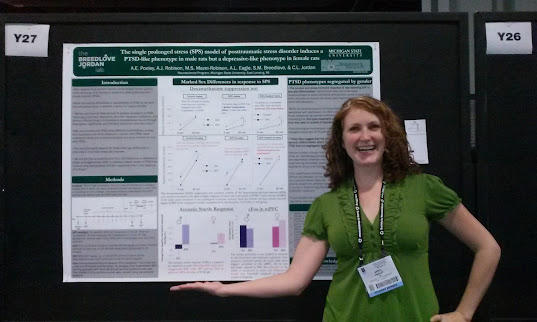 Men and women respond differently to traumatic stress, but the neurobiological basis for this is not understood. Diagnoses and treatment of post-traumatic stress disorder (PTSD) would likely benefit by understanding these sex differences--only a fraction of patients respond to current standard treatments and many more go undiagnosed or misdiagnosed. Women are twice as likely as men to develop symptoms of PTSD following a traumatic experience. They are also affected longer, and tend to re-experience trauma through flashbacks, nightmares, and intrusive memories more than men. Clinical studies indicate that women with PTSD are more likely to show an internalizing phenotype (associated with comorbid anxiety and depression) whereas men are more likely to show an externalizing phenotype (associated with comorbid aggression, substance abuse and impulsivity).

In order to replicate other findings in the field, my initial outcome measures included those that had been established only in males. While I replicated the PTSD-like effects in males, females exposed to trauma did not show the traditional phenotype such as increased startle response. However, females did show a robust increase in medial prefrontal cortex and amygdala activity and a decrease in glucocorticoid receptor expression in the hypothalamus, correlating with a depressive-like hormonal response to an acute stressor, indicating clear neurobiological but sex-specific effects of traumatic stress in females. Currently, I am working to establish behavioral readouts that capture the effects of trauma in the female brain. Taken together, these data uncover novel neurobiological mechanisms underlying the sex-influenced PTSD response patterns, and may pave the way for the development of new sex-specific diagnostic tools and treatments for men and women with PTSD.

Whether it develops out of rape, war, or car accidents, PTSD is one of the most misunderstood common psychological disorders in our society today.  PTSD is the only psychiatric disorder with a definitive known cause—a single traumatic event is necessary induce the onset of full-blown PTSD— but the traumatic event alone is not sufficient to explain the development of PTSD. Some people develop PTSD while others who experienced the same traumatic event recover relatively quickly, and the misconceptions that such an extreme response are due to an individual’s weakness, overreaction, or failure to “just get over it” still stigmatize PTSD today.

PTSD is a disorder that develops after exposure to a traumatic event and is associated with dysfunction in the normal stress response. Most people who experience a traumatic event develop an acute stress response that resembles PTSD but resolves within a month without treatment.  But for nearly 10% of the general population, this stress response is prolonged and exaggerated. Affected individuals can remain chronically symptomatic for decades with debilitating symptoms that interfere with daily functioning. Clinical manifestations of PTSD include a wide range of symptoms that overlap with other psychiatric conditions, leading to the pervasive misdiagnosis of PTSD. No biomarkers specific to PTSD currently exist; thus, diagnosis is almost exclusively based on subjective observational reports. No PTSD-specific medications exist, resulting in treatment challenges.

Epidemiological studies report that 60-90% of individuals experience at least one traumatic event in their lifetime, which most commonly includes the witnessing of someone being seriously injured or killed, involvement in a natural disaster, rape, childhood molestation, or surviving a life-threatening accident.  Without proper intervention, 30-40% of individuals with PTSD remain chronically symptomatic for years.  Because of its devastating symptoms, PTSD makes the most significant per-person contribution to the estimated $42.3 billion annual healthcare cost of anxiety disorders in the US.

According to the current Diagnostic and Statistical Manual of Mental Disorders (DSM-5), PTSD diagnosis requires the presence of four symptom clusters:  re-experiencing, avoidance, negative alterations in cognition/mood, and hyperarousal.

(1)Re-experiencing occurs through daytime intrusive memories, nightmares, feeling as though the event were recurring (e.g. reliving the event, hallucinations, dissociative flashback episodes), and intense psychological distress and physiological reactivity when reminded of the event.  Since traumatic memories do not have narrative context, they are experienced as vivid sensations and images that flood the consciousness with the full effect of the original event.

(2) Avoidance symptoms occur by avoiding activities, places, people, or emotions that induce reminders of the trauma and may present clinically by an inability to recall aspects of the trauma, diminished interest in activities previously enjoyed, and feelings of detachment from others.

(3) Negative cognitions/mood represent the persistent feelings of shame, self-blame, social withdrawal, restricted range of affect (e.g. inability to feel or express emotion), and a foreshortened sense of future (e.g. inability to envision one’s own future or milestones such as a career, family, or normal lifespan).

(4) Increased physiological arousal is indicated by sleep disturbances, irritability, difficulty concentrating, hypervigilance, and exaggerated startle response.  Like the similar presentation of the “flight-or-flight” response, these arousal symptoms are activated by the sympathetic nervous system, but are much more exaggerated and prolonged and have a lower threshold of being triggered than the normal fight-or-flight response, so in effect, a PTSD patient might feel as though they are constantly being threatened or are under attack and must remain hypervigilant to survive.

Each diagnostic cluster consists of diverse symptoms that have unique presentations in each individual; no individual will meet all 20 symptoms. Indeed, some of these diagnostic measures include depressive-like symptoms such as diminished interest in significant activities and inability to experience positive emotions, while other symptoms include aggression and reckless behavior. In humans, subgroups of individuals with either dominant avoidance or dominant hyperarousal symptoms have been revealed, which is influenced by biological sex and may result from separate or even opposing mechanisms in the brain. Understanding the mechanisms underlying different types of PTSD response patterns is crucial in determining effective individual treatment. Perhaps the most important outstanding question in PTSD research is why some people develop PTSD after experiencing a traumatic event, while others exposed to the same or similar event are resilient in their stress response.